Well, I thought I knew what I was going to do when I set out to blog weekly while we were on our trip.  I was going to do a week in review.  I have quickly discovered though, there are things that are too rich to pass up.

Before I get going on this story, I want to give Mary Ann Simonds, our partner in the wild horse DVD we recently published, much deserved credit for helping us to clarify this rich little scenario.  We have not seen this before, despite having been out with wild horses for years now, we still see new things.  How cool is that? 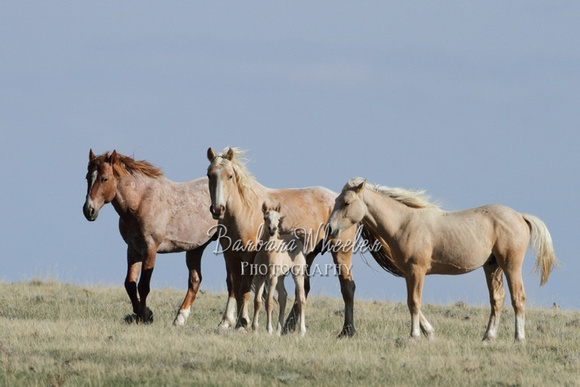 Let me start with some background here.

This red roan stallion has a little palomino band; a mare, yearling colt and young foal.  He was a very standoffish stallion, choosing to keep his band far away from both us and the other horses in the area.

This is one of the horses we saw a year and a half ago, by the way.  He had a palomino mare and other mares too.  I am assuming she is one and the same but it's very difficult to know. 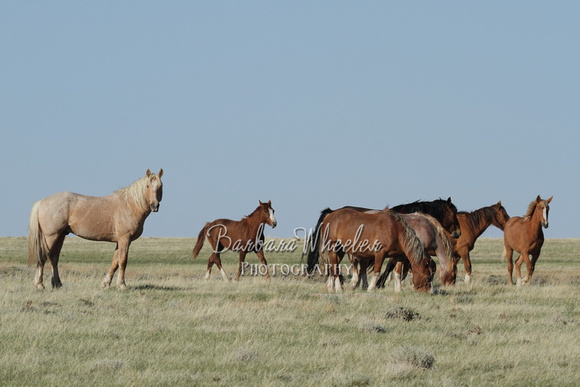 While we were photographing the red roan and his band, this large palomino stallion came in with his large band and his lieutenant.  This is the same stallion that I posted on Facebook on Thursday.

Included in his band are three yearling colts.

This photo only shows part of his band.

The two family bands are standing well apart from each other.  The red roan had run down to challenge the palomino when he first moved into the area but the palomino simply ignored him.  The red roan ran back to his band and stood on the ridge watching.

Suddenly, a buckskin yearling colt broke from the palomino's band and ran up to the red roan.  He is "grimacing" as he is approaching but he is approaching with confidence.  Okkkkkkkkk..... you really want to do that little boy? 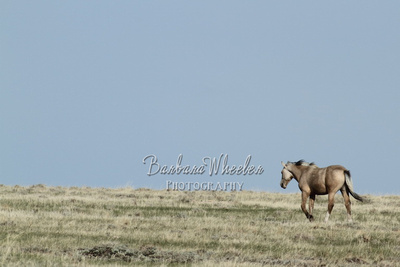 You can see he is traveling a long way- all by himself... 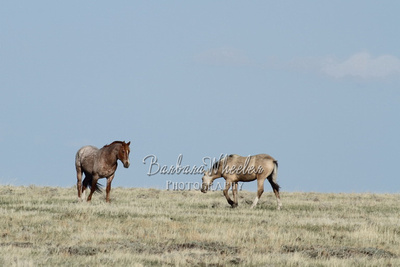 He is indicating with his head down and grimacing that he doesn't really want to fight, but he's still a bold youngster! 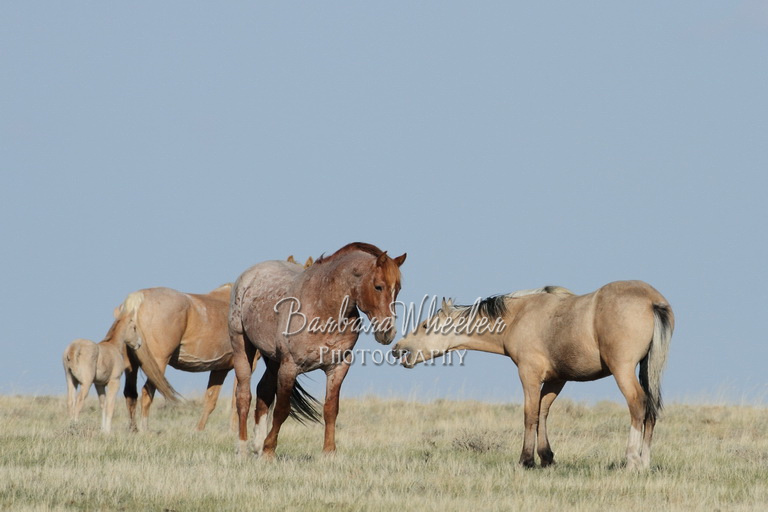 I am holding my breath here thinking this little guy may be getting himself into trouble.  Much to my surprise, the yearling's band stallion is not intervening.  In fact, he isn't paying any attention at all. 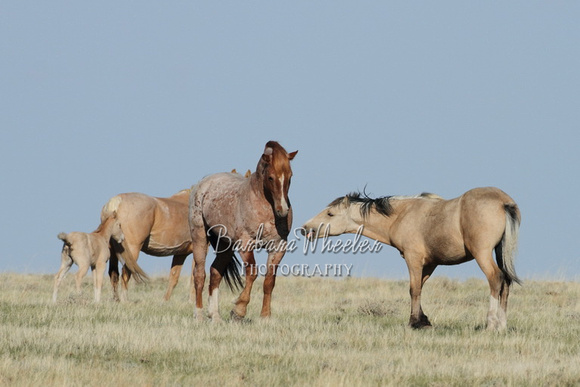 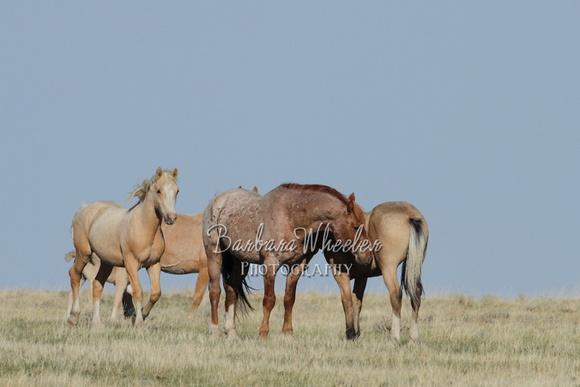 Look who is suddenly interested.  Enter the palomino yearling from the red roan's band.  This is going to get interesting! 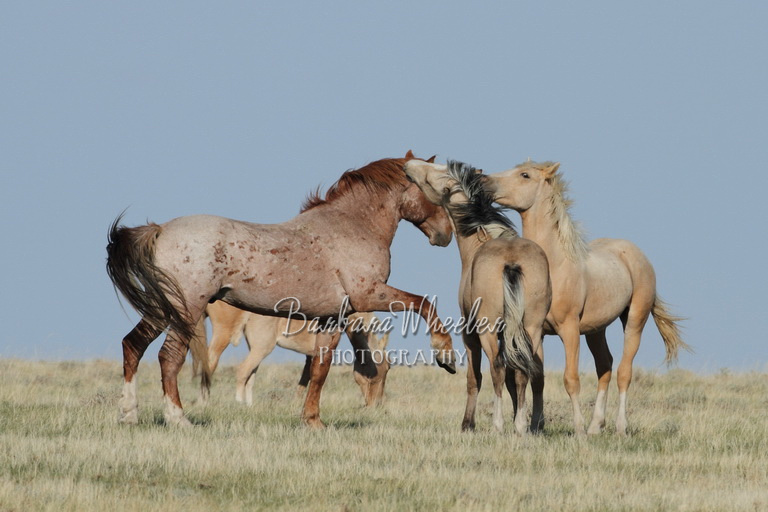 He's nearly caught between the red roan and the yearling palomino, but he doesn't back down- not one whit! 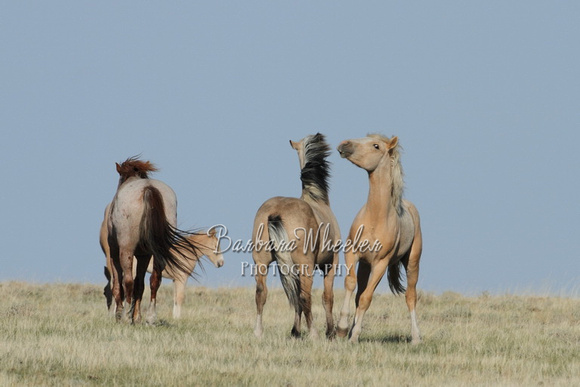 Quite suddenly, the red roan stallion loses interest in the whole thing and runs back to his mare and foal.

No one from the palomino stallion's band is paying attention.  Still. 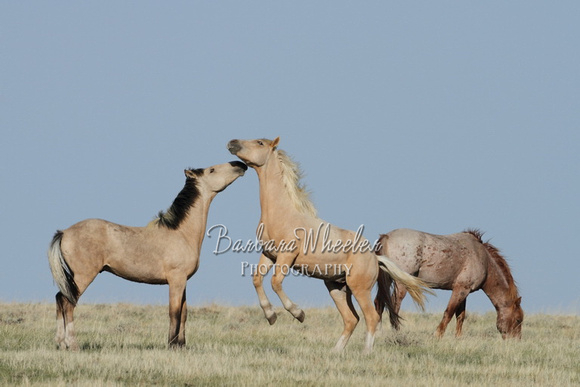 Next is a series of photos with the two yearlings playing.  They played together, between the two bands, for about seven minutes.

We have seen foals and yearlings from different bands play together, but it actually isn't very common.  It is usually very brief and every time it is quickly broken up by a mature stallion or by a mare, if it is a foal.  So, this seemed like a long time for the play to go on. 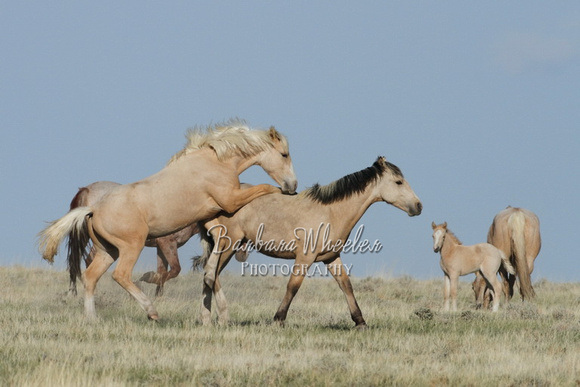 We thought this was a sign of dominance but Mary Ann explained it is usually not.  It's just 'horsing around'.  Maybe it is also practice for when a stallion is old enough to breed, so he can get it right when the pressure is on.

I loved how intently the foal is watching all of this.  The mare and stallion are not paying any attention. 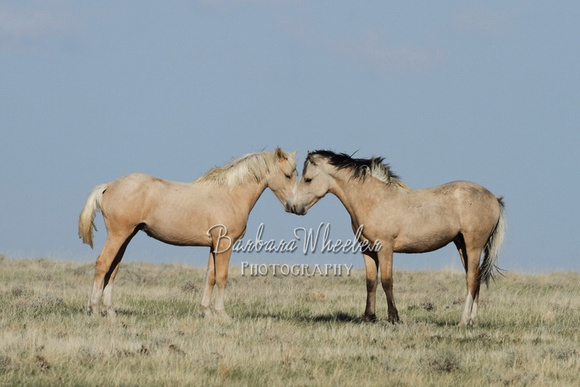 Such a familiar mature stallion pose, isn't it?  Smelling each other...who are you? 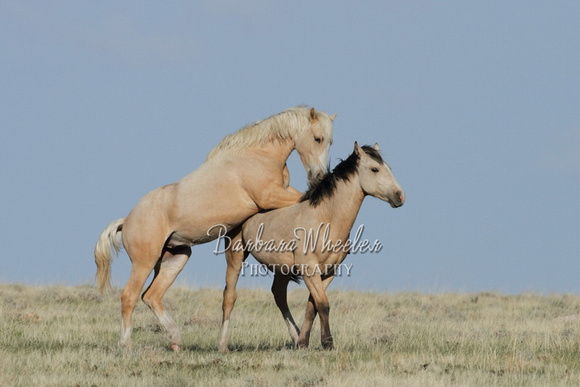 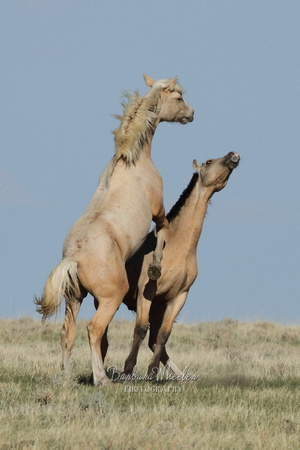 Yearlings seem to love to do two things; rear up and bite each other's legs.  Practice for the 'real thing' later. 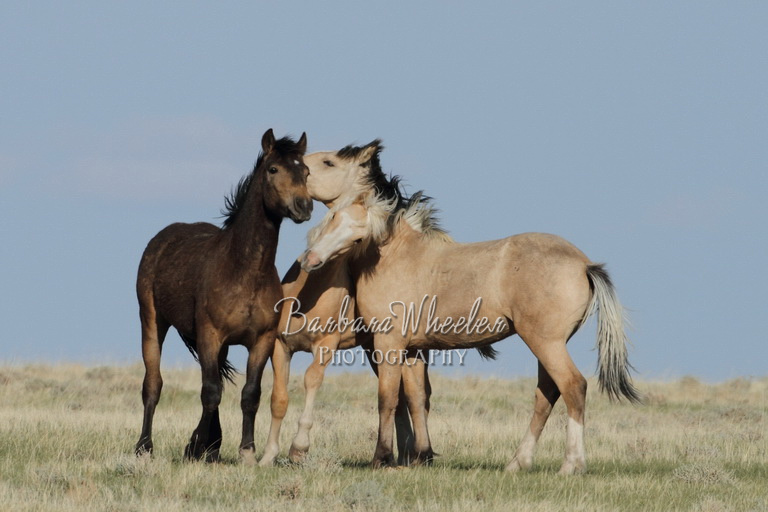 Suddenly another yearling colt from the palomino's band joins the fray.  Uh oh!  Caught in the middle! 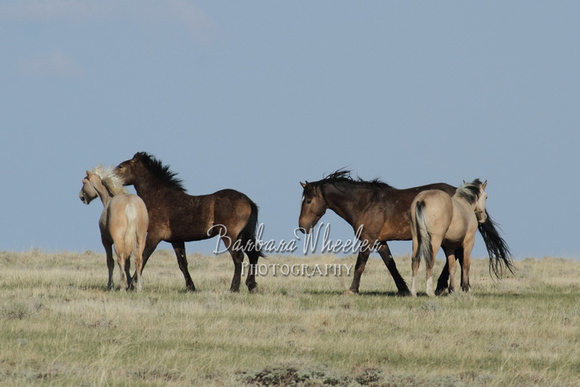 Finally, the palomino stallion's lieutenant decides he'd better check it out.  He didn't do anything other than walk up to the group but the buckskin must have been feeling guilty.  He ran back to his band. 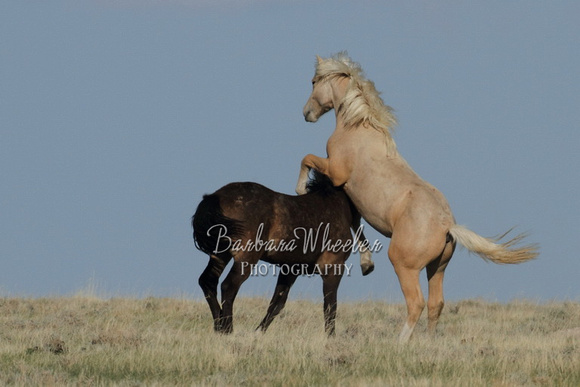 It's more of the same dance but with a different partner! 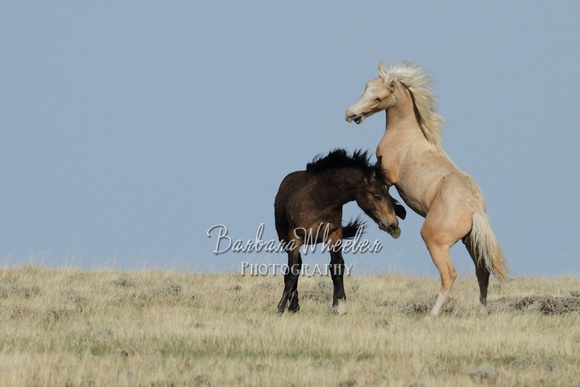 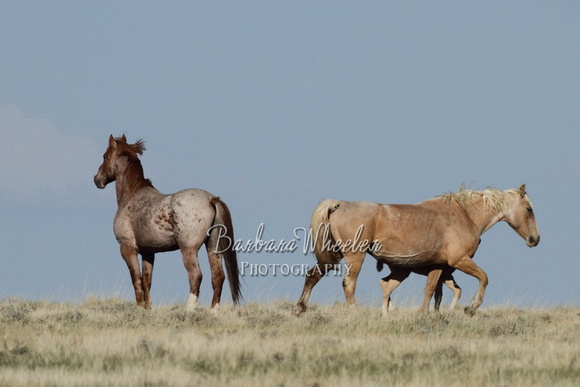 The red roan spots another band in the distance.  He is getting very nervous. 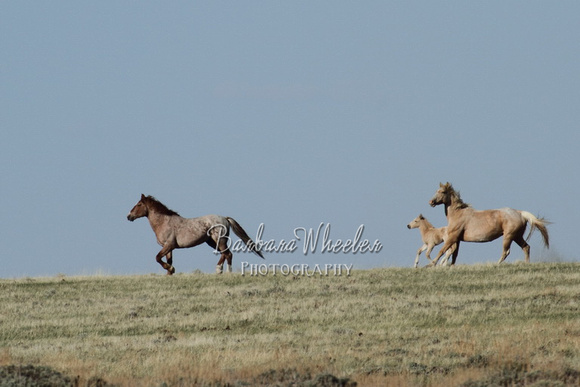 He decides it is time to remove himself and his family from the area.  The mare followed, but it was obvious that she was uncomfortable leaving her yearling behind.

It is hard to appreciate how far away the yearling palomino is from his band, but it quite a distance. 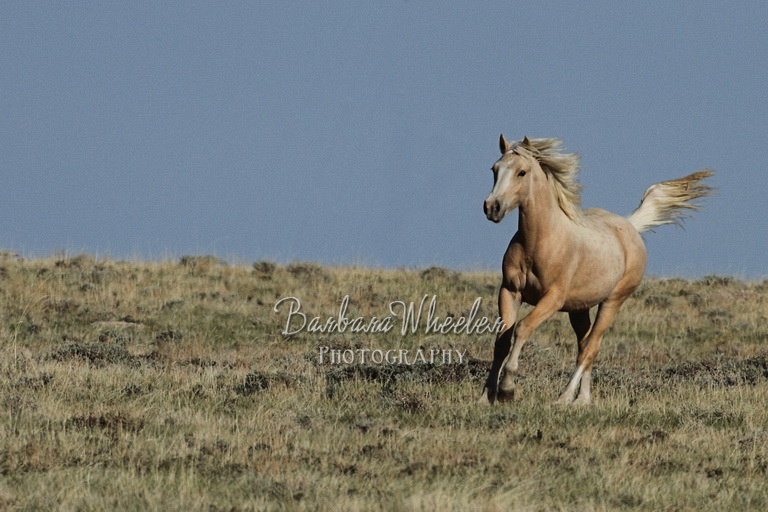 UH OH.  I messed up!  The yearling suddenly realizes he is not only far away from his band but that he is quickly being left behind!  He didn't waste any time catching up, believe you me!

Mary Ann has seen young horses, especially colts, approach mature stallions in the field.  She called it "Truth or Dare" or better yet, "Neener, Neener".  It's a bit like they want to see what they can get away with.  Sometimes, when challenged or chased off by the mature stallion, they will run away with glee, their tail in the air.   Sounds a bit like human young boys, doesn't it?

Horse play like this is only seen in healthy social herds.  Horses that are stressed, do not exhibit play.  It is also a sign that the herd is healthy when the other mature horses allow yearlings from different bands to play together.  Even though it got a bit rough, especially when there were three yearlings, no one intervened, trusting all was okay.

This youngster was doing just fine until he realized he was being left behind by mom and dad.  UH OH, is right!  He almost bit off more than he could chew!  LOL

You all enjoyed the video so much last week, I thought I'd add another.  It doesn't have a thing to do with the rest of the blog.  Just some stand-alone fun!

This video is of older stallions.  It isn't playing but establishing leadership and determining ranking.  Think of them as 25 year old human young men, asserting themselves with each other.  It's no longer really goofing around, but establishing who is tougher than who.

The warbonnet (you may remember him- we photographed him in the fall of 2010) has been hanging out with two black Curly stallions for the past four or five days.  In this video, the group is approached by the hefty and aggressive black Curly stallion that I posted on Facebook yesterday.  You can see how much bigger and heavier he is than the other two.  The third stallion in the stallion band was smart about it and didn't enter into the fray.

The warbonnet really isn't much of a match for the black stallion.  He is still riled up when it is over and proceeds to get in his friend's face.

Notice that no one was hurt, there was no blood shed and after it is all over, the two stallions go immediately back to eating.

This is very typical stallion behavior and frequently seen, particularly in the spring, during foaling time.

Listen for the grunting, heavy breathing and screaming.  You've heard me talk about these sounds before and now you'll know what I mean.  If I could sprinkle in some 'essence of sage', you would be right there with me.

Yes, that is my trusting husband Marty, asking if I just got that on video!  LOL

If you liked this blog, you will likely like our DVD on wild horses; Wild Horses: Understanding the Natural Lives of Horses by Mary Ann Simonds, Marty and I.  If you love wild horses, this is not to be missed!  Photos and text are accompanied by the beautiful Native American style music by Grammy nominated musician, Diane Arkenstone.  You can view a trailer and purchase the DVD ($14.95) at http://wildhorsesdvd.maryannsimonds.com/

Proceeds from this DVD help us to stay on the road, studying, documenting and photographing our country's beautiful wild horses.  We thank you for your support.

I would like to give special recognition and thanks to Mary Ann.  Through the years, she has been an invaluable resource for understanding wild horse behavior.  Without her knowledge, expertise and willingness to teach, we would only be guessing at much of what we see.  Thank you Mary Ann!

If you would like to learn more about horse behavior, both wild and domestic, visit her website at http://maryannsimonds.com

Did you know you can subscribe to my blogs?  Just go to the bottom and click "Subscribe."  You will receive an email when each one is published.  This will work for Firefox and Internet Explorer.  If you use Google Chrome (like I do), you will need to check "Help" for instructions on how to subscribe to a RSS or a "feed".

Michael(non-registered)
Thanks Barbara!!! After all the freakin' round-ups lately, this bit of unblemished nature was very much appreciated!
Jennifer Delmage(non-registered)
That stallion on the right looks as if he could be the twin of my 2003 divide basin mare!Big, blakc, stocky, leg feathers, the whole package! <3
DOHorsewmn(non-registered)
Amazing! I love all the pictures, stories, and videos! Keep them coming!
Sami(non-registered)
Awesome is not all you guys are, you are IMPRESIVE! I love all you write and pics are just glorious to behold. Wish I was there.
Robyn Mullhausen(non-registered)
Where do I begin!? Verrry interesting blog again. The yearlings' interaction was so interesting to see. I could almost see their minds ticking. One thing I noticed was the Palomino and the Buckskin had similar body colors but one with white mane and tail and the Buckskin with black mane and tail. Almost opposite color stockings too. The Lieutenant who intervened looked like the bouncer in the bar that nobody wants to mess with. :) The shot of the Palomino yearling taking off to follow his band is just beautiful. The video was great and I thank you and Mary Ann for all the interpretation of the moves, squeals and snorts that go on. I might go out and buy a sage candle to burn while I am reading you blogs and viewing your beautiful photos then all I need is some "Eau de Horse Cologne" and I'll be set. lol When that big black Curly came marching in, it was pretty much all over....."Ya want a piece of me Bud, huh, do ya?"....from the Warbonnet "Well, no Sir, just wanted to meet ya." That is a big sturdy horse.
Barbara, I didn't think it could get any better than all the photos and comments you've posted on FB from past years, but the new photos and this blog are just sensational....in my not so humble opinion. Great job!
No comments posted.
Loading...
Subscribe
RSS
Recent Posts
A Tale of Two Stallions (Cerbat Herd Area, Arizona) The Second Half of Our Trip (2013) Week 7 - Bachelors! Blog 4- The First Half Jack! South Steens Wild Horses (Oregon) - Part Two South Steens Wild Horses (Oregon) -Part One Week 9- Golden Boy: The Life and Death of a Stallion Week 8- Stallions! Week 7- Miscellany, Odd & Ends and Stuff That Doesn't Go Anywhere Else
Keywords
Photography HMA Wheeler Mustang behavior black BLM States United fighting
Archive
January February March April May June July August September October November December
© Barbara Wheeler Photography
Powered by ZENFOLIO User Agreement
Cancel
Continue