Have you ever wondered what wild horses do all day?  I certainly have.

We have spent whole days with the wild horses before.  However, usually we go find a place to rest in the middle of the day and then go find the horses again.  That is, if they haven't already wandered off on there own long before our rest period.

A couple of weeks ago we decided to spend the whole day with them, if it was possible (sometimes it just doesn't work that way).  It was our last day in Utah and we wanted to make it the best day that we could.

We arrived just as the sun was coming up.  The horses were out a ways in the meadow but we were hoping they were coming in soon.  From the previous mornings we had spent with them, it was about that time.  We were right.  It didn't take long for them to start to drift into the water hole. 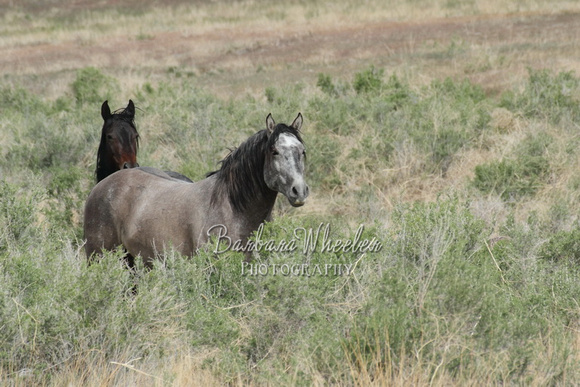 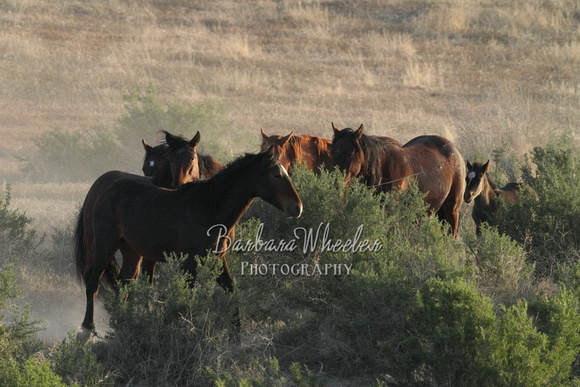 As is typical with wild horses, they came in in groups; family band by family band. 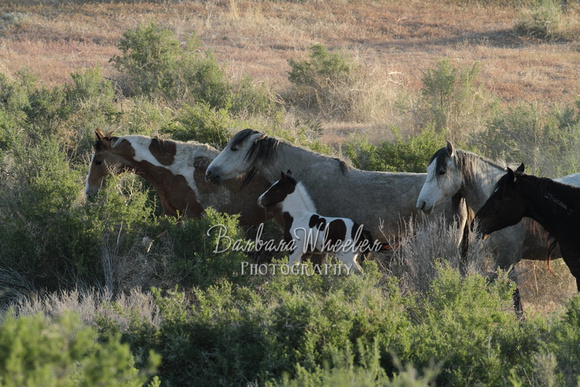 This particular waterhole had a trough and a pond.  A second trough was dry.  There was plenty of water for all though. 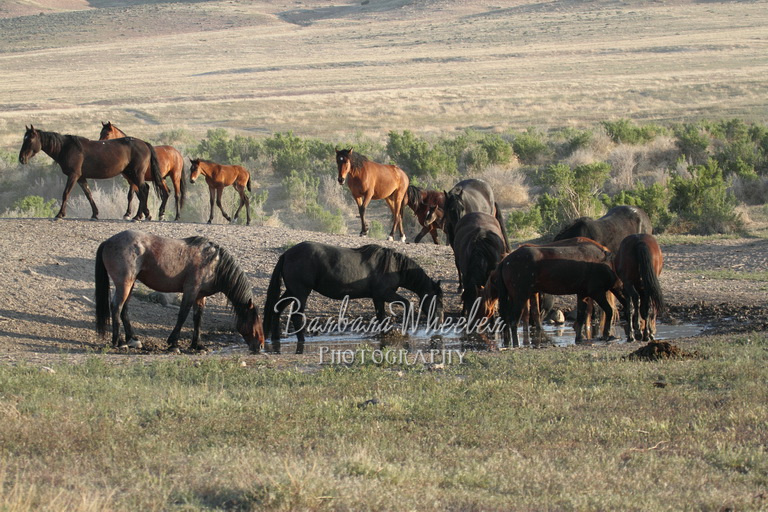 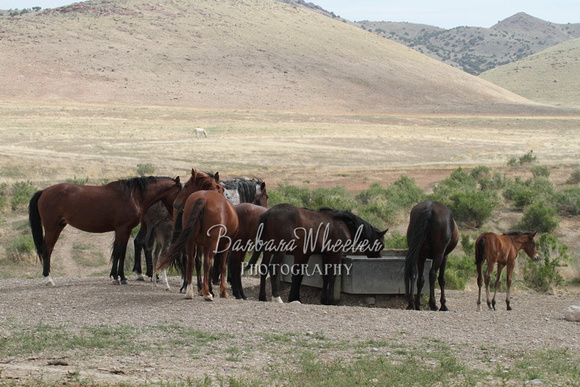 Of course, with that many horses in close proximity to each other, there are bound to be clashes. 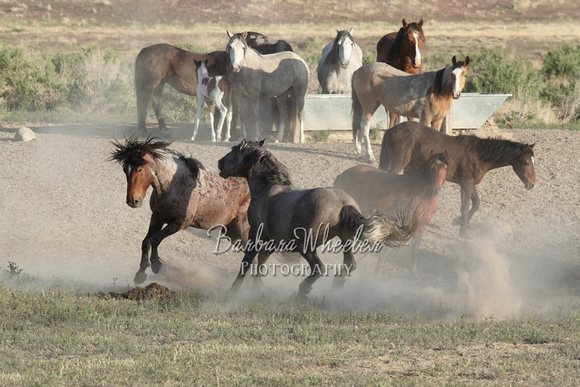 Stallions are bound to think another stallion is too close to his mares.  Or perhaps, that was his spot.  Who knows? 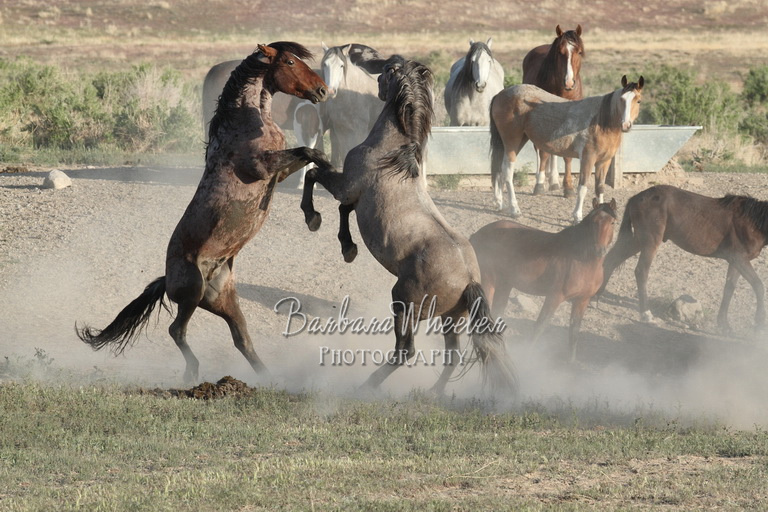 Notice how the mares are unfazed by all of this.  "Ho Hum.  There they go again!"

Family bands tend to take turns at the trough or the pond.  Well, mostly.  There is a heirarchy though.  Bachelors always wait until the last to drink, sometimes even after all of the other horses have left.  It doesn't mean they aren't creating all kinds of mischief on the edges of the herd though.  ;-)

We have spent a lot of time with horses at waterholes.  It is typical for them to come in and drink and then leave.  Even a herd of 75 horses, like the video I put on Facebook a couple of weeks ago, may take only 15 minutes to drink and then they go.  Not this time though.  For whatever reason, this group stayed around the waterhole for an hour.  The rested, ate, played in the water, and of course, the stallions did their "thing." 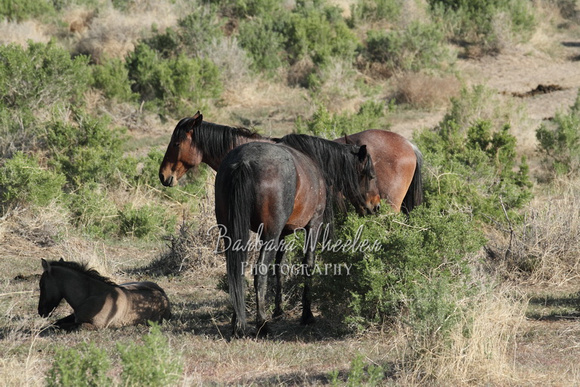 Some just hung out with their friends. 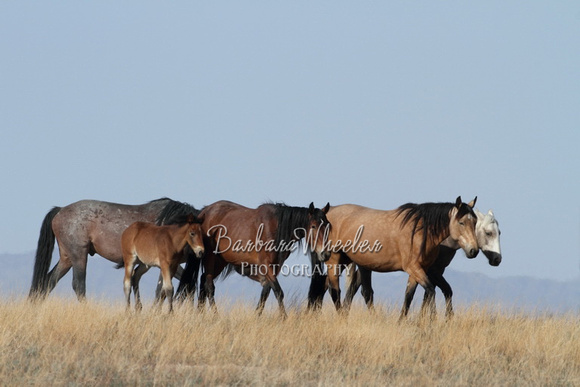 We knew that all of the horses weren't here.  We had seen a large group behind a hill when we came in.  We suspected they would come to the waterhole sooner or later but we didn't know when.

The first clue they were coming was the large cloud of dust behind us.  A few minutes later, we could see it was horses.  They came in band by band, nearly in single file.

Can you count them?

There are about 75 horses here, including the white stallion loosely bringing up the rear.

We fully expected them to come to the waterhole.  After all, we had seen all of these horses at this same waterhole several times now.  However, much to our surprise, they walked right past the water and kept going... 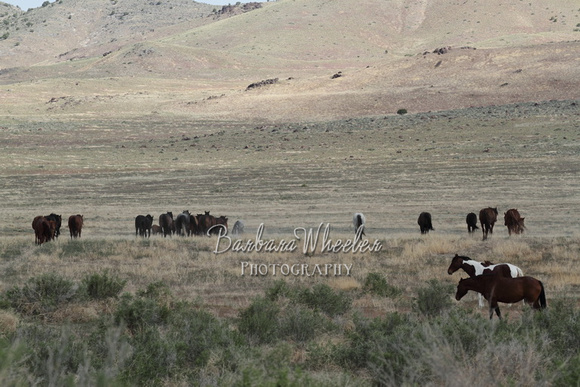 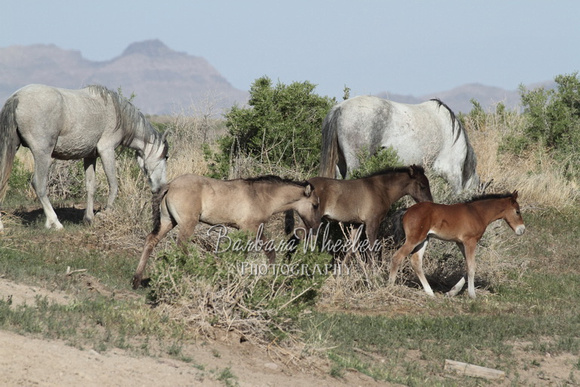 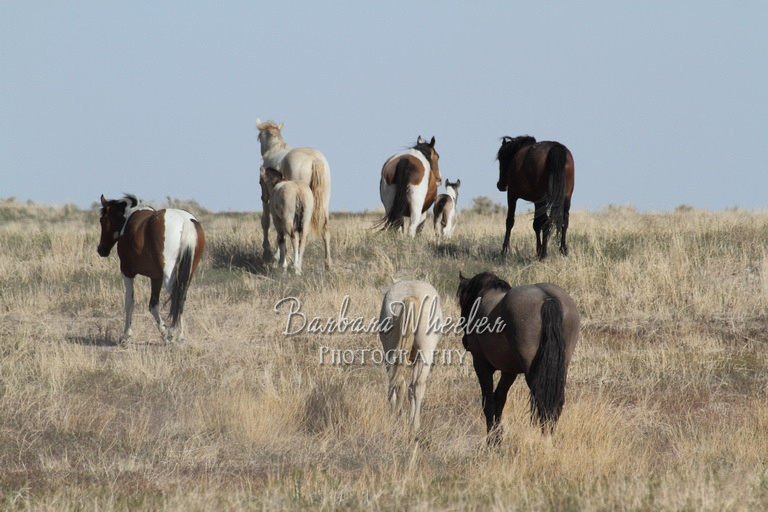 Then I spotted my favorite family band.  The buckskin mare has a new foal- a very new one!  This shot is the closest we got to a complete family photo- and its the "going away" view!  LOL 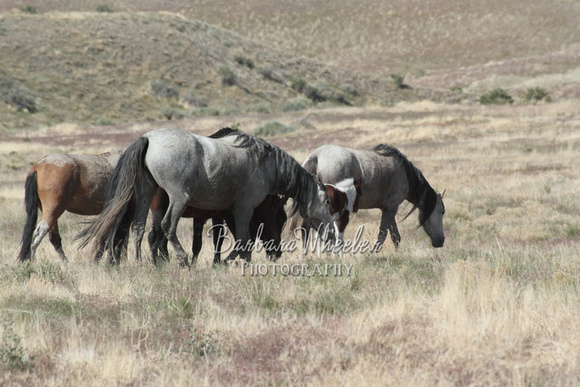 And they kept going... 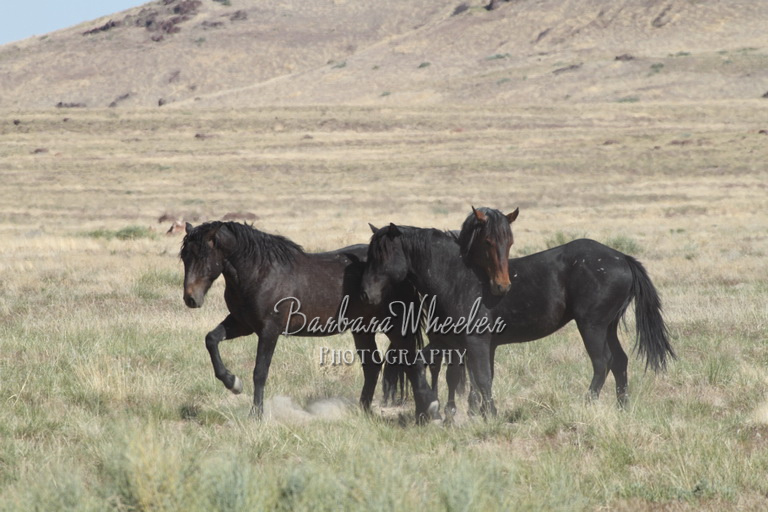 Of course, the boys had to stop and scuffle once in awhile but they just kept on going... 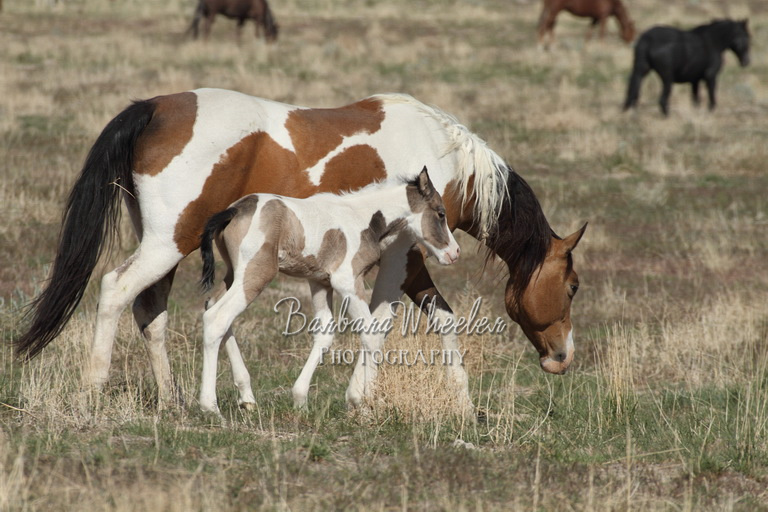 A close up of our new foal.  What an absolute cutie!  Mom shows signs that is has only been a few hours since birth. 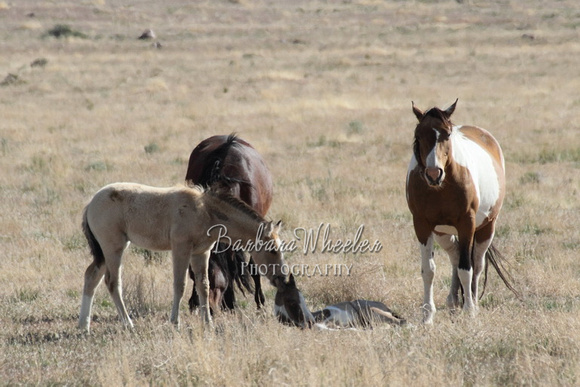 The little ones have to stop and rest.  Its a long hike to where they are going.  Just where ARE they going?

Here the older foal in the family band is checking out the new member. 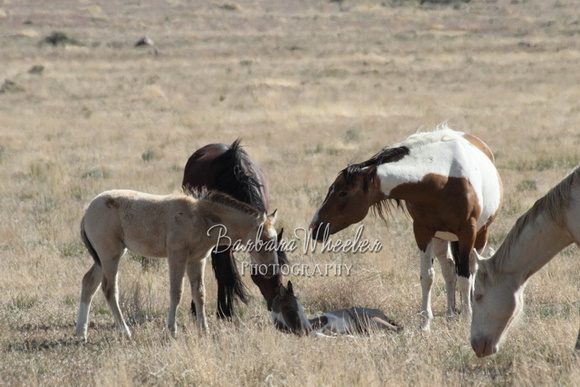 Mom is very protective and warns the older foal about being very careful.

We are following at a crawl in the pick-up.  We could run and not keep up with horses, even when they stop and graze and rest.  I found that out last year!

And we keep going and going.  We have never been this far up the road.

AHA!  Another waterhole!  This one must be much better than the one they passed an hour or so ago.  The horses all stop here.  The horses at the first waterhole have joined them now. 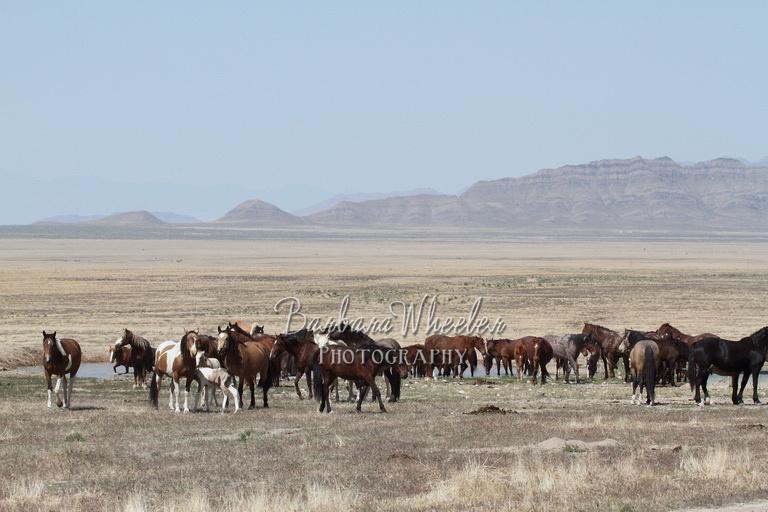 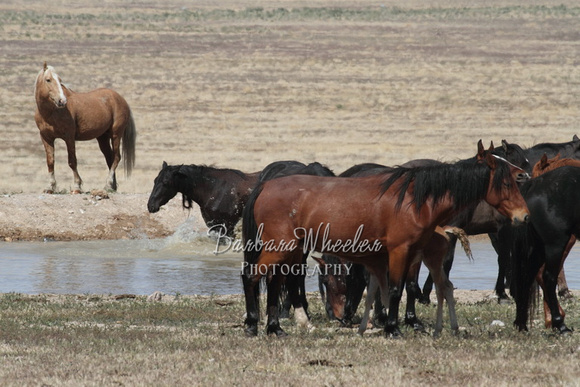 The one eared palomino waits to go to water.  His mare has gone boldly forward (back center). 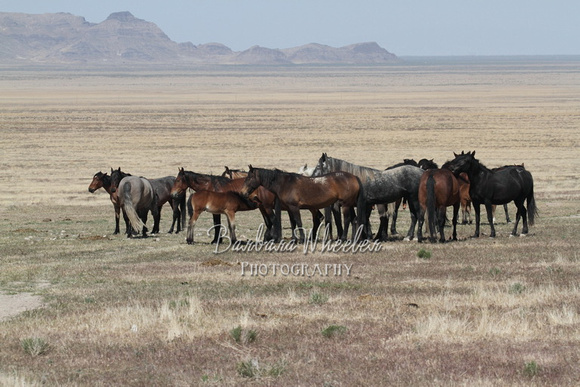 The large group mills around the waterhole for awhile, just resting, grooming and even sleeping. 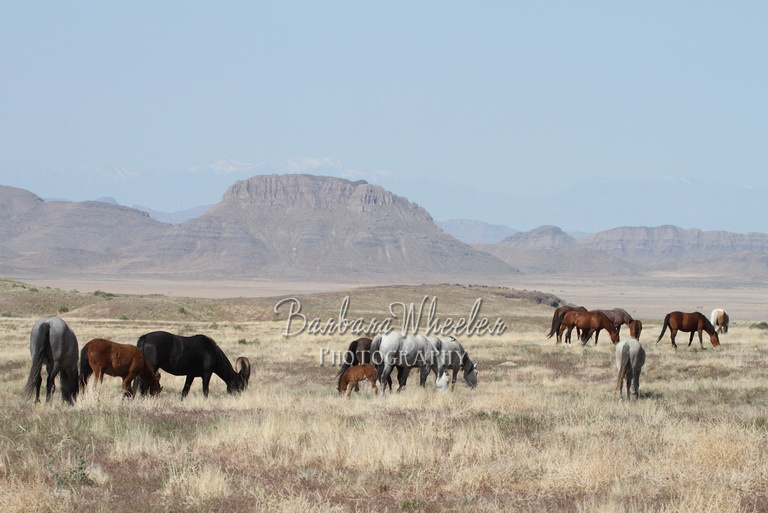 After watering, the horses drifted slowly away, eventually ending up on a small hill.  There they stayed for several hours, most of them sleeping.  Occasionally, we would see one of the bachelor's make a fuss, but generally it was very quiet.  We took our quiet time too, checking on them off and on with the binoculars.

Late in the afternoon, the horses began to move around a bit.  After a few minutes, it became apparent they were moving again.  Would they come back to the same waterhole?  Nooooo.... off they went in the direction we found them in the morning.

We're on the move again! 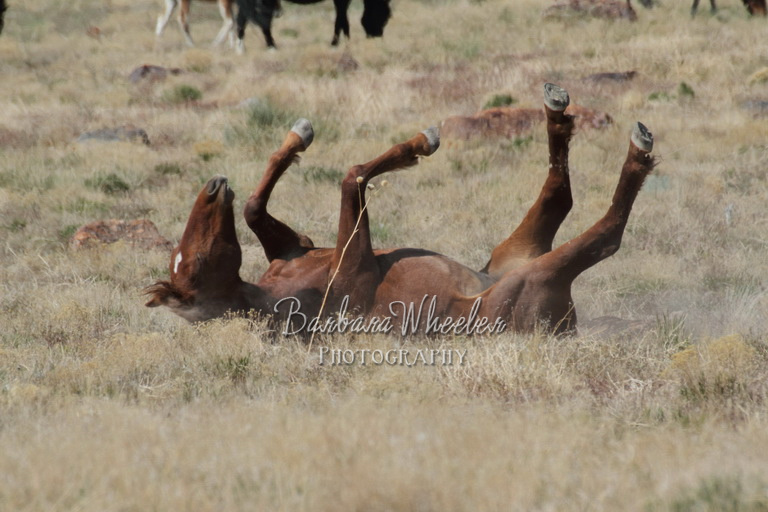 With an occasional stop to take a roll... 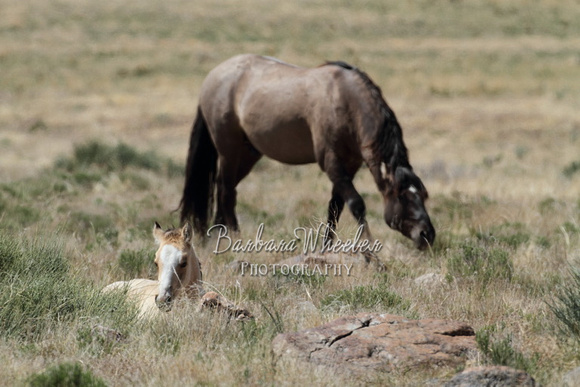 Uh oh, maybe its not time for a nap after all! 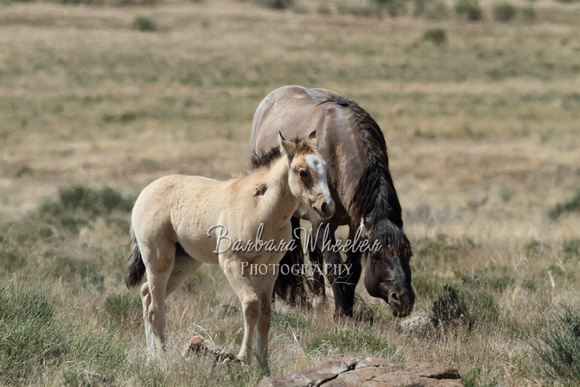 Time to get along there little one, we have places to go!

Sometimes in the chaos of moving, a foal will get displaced from mom.  This foal ran too far ahead and suddenly realized he didn't know where mom was. 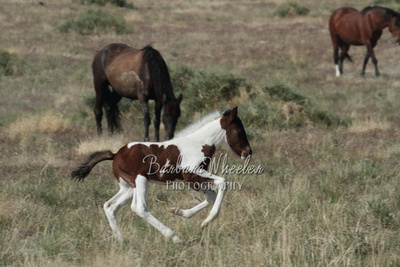 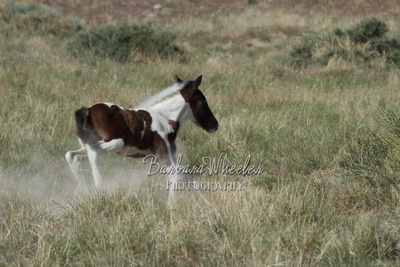 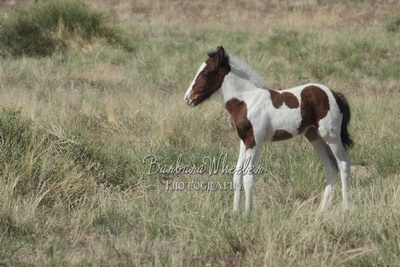 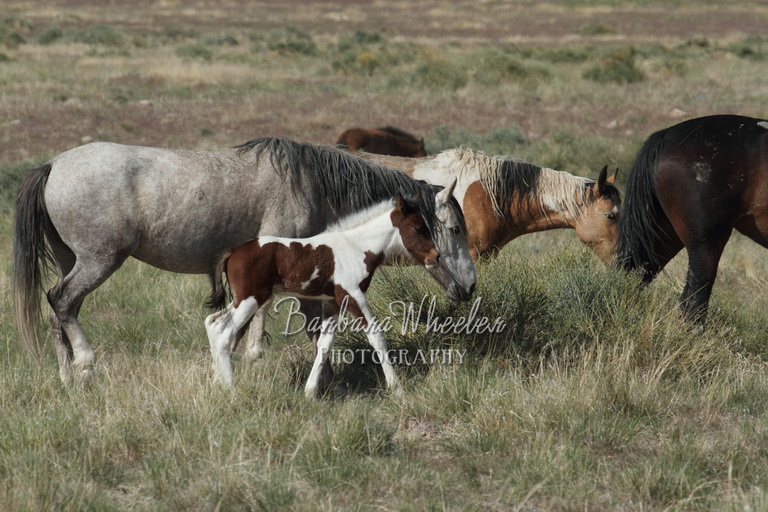 After a couple of attempts at other gray horses, including one cranky stallion (he shooed him off), he finally finds mom.  Maybe he'll stay closer this time! 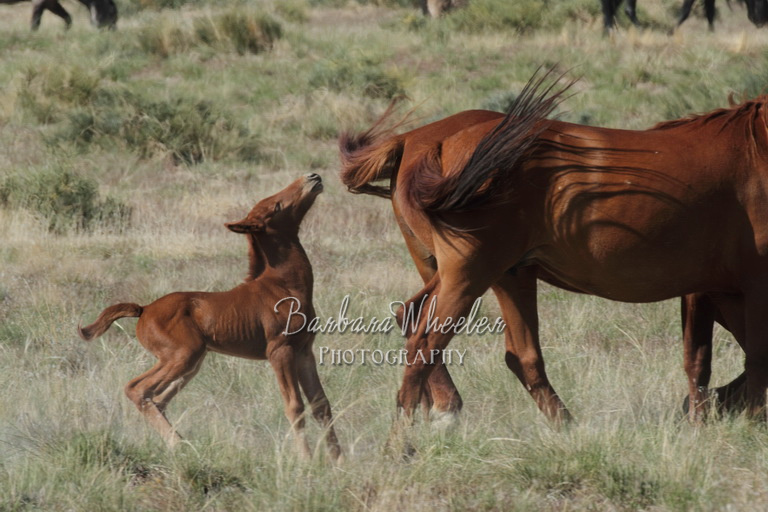 Then there is something about being a bit toooo close- you CAN get a nose full of tail!

On and on we went, following the horses while they stopped to eat, sleep, roll, tussle with each other and just generally did what horses do. 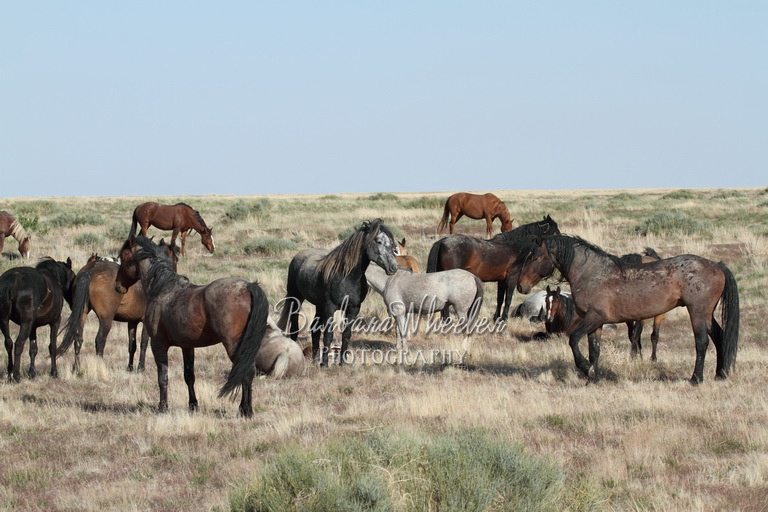 If you liked this blog, you will likely like our DVD on wild horses; Wild Horses: Understanding the Natural Lives of Horses by Mary Ann Simonds, Marty and I.  If you love wild horses, this is not to be missed!  Photos and text are accompanied by the beautiful Native American style music by Grammy nominated musician, Diane Arkenstone.  You can view a trailer and purchase the DVD ($14.95) at http://wildhorsesdvd.maryannsimonds.com/

Proceeds from this DVD help us to stay on the road, studying, documenting and photographing our country's beautiful wild horses.  We thank you for your support.

I would like to give special recognition and thanks to Mary Ann.  Through the years, she has been an invaluable resource for understanding wild horse behavior.  Without her knowledge, expertise and willingness to teach, we would only be guessing at much of what we see.  Thank you Mary Ann!

If you would like to learn more about horse behavior, both wild and domestic, visit her website at http://maryannsimonds.com

Did you know you can subscribe to my blogs?  Just go to the bottom and click "Subscribe."  You will receive an email when each one is published.  This will work for Firefox and Internet Explorer.  If you use Google Chrome (like I do), you will need to check "Help" for instructions on how to subscribe to a RSS or a "feed".

Sharon McClain(non-registered)
Love your work. This he
rd has some beautiful colors. Thank You so much for all you do for the Horses and all of us at home.
kathy Thompson(non-registered)
Thank you ...this is fun tosee ,what a nice thing you do for every one .
Ann Johnson(non-registered)
WONDERFUL!!! That foal who wandered off and finally found mom is adorable! Love the markings!! AND the darker bay foal with the grey mom, is wonderful too. LOVE, LOVE the videos!! Thanks soooooo much!!! Great blog!!
Emily(non-registered)
This was a wonderful journey, thank you for taking us along! I love all the little pinto foals, they're precious and I adore the buckskin mare with the new foal, I noticed it right away in the video :) Great pictures and fun videos as always! I'm glad we get to go along with you.
Marilyn Sain(non-registered)
I love the photos. You make the stories that go along with the mustangs so interesting! I look forward every day for your post on Facebook and for your blog on Sunday. Thanks for all your work on this project!
No comments posted.
Loading...
Subscribe
RSS
Recent Posts
A Tale of Two Stallions (Cerbat Herd Area, Arizona) The Second Half of Our Trip (2013) Week 7 - Bachelors! Blog 4- The First Half Jack! South Steens Wild Horses (Oregon) - Part Two South Steens Wild Horses (Oregon) -Part One Week 9- Golden Boy: The Life and Death of a Stallion Week 8- Stallions! Week 7- Miscellany, Odd & Ends and Stuff That Doesn't Go Anywhere Else
Keywords
Photography HMA Wheeler Mustang behavior black BLM States United fighting
Archive
January February March April May June July August September October November December
© Barbara Wheeler Photography
Powered by ZENFOLIO User Agreement
Cancel
Continue